“An apple a day, keeps the doctor away”: an aphorism that is often told to kids to entice them to eat more fruits. Although it may have an element of truth in it, it also serves as a nice example of the rhyme-as-reason effect, a cognitive bias that describes the tendency of people to perceive statements as more likely to be true, when put in the form of a rhyme.

Biases in human reasoning affect all aspects of our lives and have been studied extensively. Daniel Kahneman, an Israeli psychologist was one of the first and most prominent in this field and received a Nobel prize in economics in 2002, for his work on cognitive biases and their effect on people’s buying behavior.

Apart from economics, cognitive biases are also important in medicine. For example, humans consistently overestimate the likelihood of rare diseases (referred to as a zebra in American medical slang), causing overdiagnosis, which results in unnecessary stress for patients and economic burden for clinics.

Shortcomings in human cognitive capacities can have even more serious consequences than overdiagnosis. Human error in medicine has recently been identified as the third leading cause of death in the US. In radiology, errors are not only affected by faults in reasoning, but also in perception [1, 2, 3, 4, 5, 6, 7, 8, 9, 10, 11, 12, 13].

Some important perceptual biases in radiology are

Biases causing misinterpretation in radiology (and medical diagnosis in general) are

To prevent these biases, procedures such as checklists, decision trees and standardized reporting systems have been proposed. Computers, in the form of — computer aided diagnosis (CAD) — can also mitigate these effects. What better way to aid someone then to compensate for their mistakes? This post discusses some common setups in which radiologists act with AI systems and postulates how errors resulting from perceptual and cognitive biases could be mitigated.

Baring a few exceptions, it will likely be some time before AI systems are allowed to read medical images completely autonomously. Until then, systems should complement radiologists and compensate for mistakes humans make. The final performance is a function of the radiologist, the system and the interface between them. This paradigm is often referred to as ‘augmented intelligence’ or ‘complimentary intelligence’ and was eloquently phrased by Gilbert et al. [14]:

“[…] Instead, we must focus on promoting the model of the “centaur”, a highly trained human working together with an AI to achieve more than would be possible alone.. “

At the moment there are roughly three different setups where the computer interacts with a radiologist. In common parlance, all of these are referred to as ‘computer aided diagnosis’ (CAD), although this term is also often used as a subtype of general CAD. All setups require different ‘levels’ of automation. Similar to automation levels defined for self-driving cars [15], one could generate a (somewhat hand-wavy) hierarchy, with the doctor on the one end and an autonomous AI system on the other. A depiction is given in figure 1.

Download
Figure 1. Different setups in which computers are used in radiology applications and their respective level of automation. In the ‘computer aided detection (CADe)’ setup, an algorithm is used to pre-select areas in a case that look suspicious, the radiologist does the diagnosis. In the ‘computer aided diagnosis (CADx)’ setup, an algorithm helps with assessment of suspicious areas. In a ‘computer assisted simple triaging (CAST)’ setting, an algorithm pre-selects only important whole cases for radiologists to read. In the final setting, the algorithm performs the task completely autonomously. (image by author)

In this setting, the radiologist opens an image and queries the system which subsequently shows markers or heat maps on suspicious areas. The US Food and Drug Administration (FDA) describes CADe systems as [16]:

Although promising, it was shown that that early systems were mostly effective for catching errors in search, in particular small pathologies such as calcifications in mammograms, but were simply distracting for things that would have been found anyway. Because of poor independent performance, the system turned out to be ineffective in the clinic.

Figure 2. Example of computer aided detection systems. An input image, a mammogram in this case (left), is fed through a machine learning algorithm that adds markers (middle) or generates a heatmap (right) on suspicious areas. (image by author)

The reason for this lack of ‘augmented intelligence’ has been attributed to the automation bias, which describes the tendencies of humans to trust automated systems too much. This bias can be a blessing and a curse. Any system operating below human performance will drag the radiologist down, any system operating above it will make it better.

CADx systems do not (only) mark suspicious areas in the image. Instead the system provides some more information that is relevant for the diagnosis, such as a score for the image or part of the image. The FDA describes CADx as [14]:

Download
Figure 3. Examples of computer aided diagnosis (CADx) systems. An input image, in this case a mammogram (left) is fed through an ML algorithm. A user can query a region in the image to get a malignancy score for that particular region (middle) or simply get a score for a whole image (right), along with potentially a heatmap where the malignancy is (image by author).

Some examples of CADx systems are:

A. Interactive decision support In this setting the radiologist queries a region in the image and the system shows a score that represents the degree of suspicion of the region [17].

Although the idea has been discussed extensively [18, 19], to date little (or none?) clinical applications exist. It is also difficult to say if displaying similar images with their classes actually improves the reader’s performance over something like simple decision support.

Figure 4. Illustration of the use of a content based image retrieval (CBIR) system for computer aided diagnosis. A user could query the image and the system will look for similar regions along with their respective diagnosis.

CADx systems will mostly target errors in interpretation (such as the anchoring bias and zebra retreat), search errors will largely remain unaffected because the radiologist still has to search for suspicious areas. The automation bias may be less likely to gain a foothold, because the user typically has to query the system first.

Triaging systems rank patients based on urgency, by estimating an outcome such as their condition or probability of recovery. The idea of using computers to do triaging is sometimes referred to as computer assisted simple triage (CAST). This was initially proposed for emergency room settings [20], but recently caught on in other domains [21, 22]. The FDA describes computer aided triaging systems as:

“Computer-triage devices are computerized systems intended to, in any way, reduce or eliminate any aspect of clinical care currently provided by a clinician, such as a device for which the output indicates that a subset of patients (i.e., one or more patients in the target population) are normal and therefore do not require interpretation of their radiological data by a clinician.”

At the moment there are roughly two different settings:

A. Soft triaging Here, all cases are ordered and presented to a doctor in this order. This allows the clinician to focus on the most pressing cases first. Figure 5 shows an illustration of such a system.

Download
Figure 5. Illustration of a ‘soft triaging’ system. The algorithm ranks cases based on some measure of urgency (for instance how likely it is the case contains a disease) and sends them in the form of an ordered list to the practicing physician.

In a soft triaging setting, essentially all the cognitive biases that are present -on a case level- still apply. However, radiologists may be less likely to miss essential information due to fatigue, since they can schedule the urgent cases at times when they feel most rested, provided the diagnosis task allows them to.

If implemented well, the algorithms are expected to generate a better triage than humans and therefore on a case-list level, biases stemming from misinterpretation are expected to be mitigated.

B. Hard triaging (or rule-out systems) Similar to the soft triaging approach, the cases are ordered but instead, the bottom x% is no longer presented to a doctor, to free up time. This is particularly useful in low incidence settings such as screening, where large proportions of cases could be diagnosed automatically. Figure 6 displays an illustration of this setup. 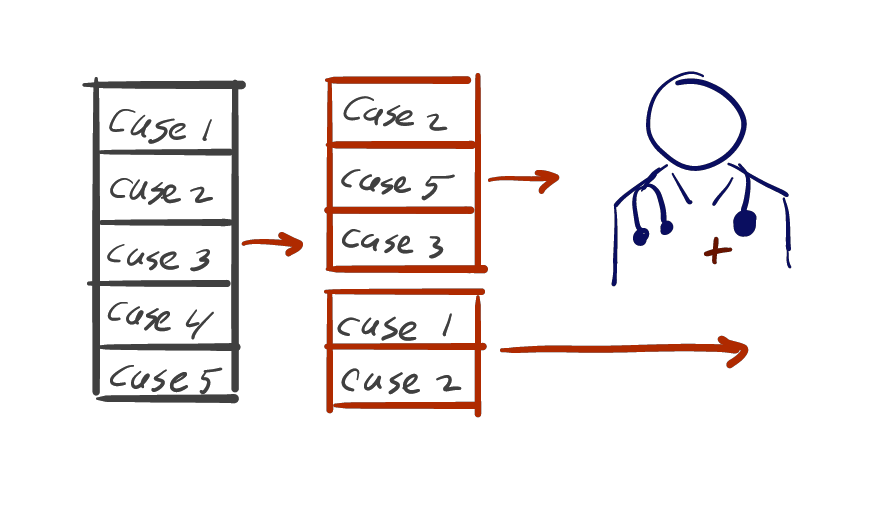 Download
Figure 6. Illustration of a ‘hard triaging’ system. Similar to a soft triaging system, an algorithm is used to rank cases. Here, however, a threshold is set on the measure of urgency and only the most urgent/suspicious cases are sent to the radiologist, the rest are filled out automatically.

Again similar to soft triaging, cognitive biases that apply on a case level are still present in all the cases that are shown to the radiologists. You could argue that the automation effect is eliminated for cases not shown to radiologists, or that it is simply the extreme case of the automation effect: all cases follow the diagnosis of the system. An advantage, however, is that it is easier to evaluate the system for this subset, because user interactions do not have to be taken into account.

In 2018, the FDA gave approval for the first ever autonomous AI system, a system used in screening for diabetic retinopathy [23]. For most applications in medical image analysis, it may be some time before a similar system will be realized, as development takes years and regulations should be strict [24]. Some intermediate steps could still be applied though.

In some screening settings such as lung and breast cancer screening, exams are sometimes read by two radiologists, typically independently. One of the two radiologists could be replaced by a system operating autonomously. In this case the ‘augmented intelligence’ component is still there: concepts from ensemble learning apply and the system is somewhat simpler to analyze. An illustration of this setup is provided in figure 7. 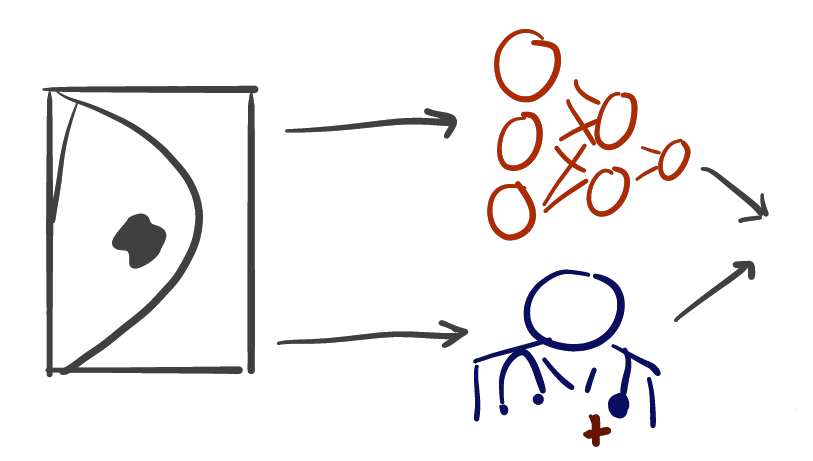 Download
Figure 7. In some radiological settings (such as screening for breast/lung cancer) images are read by two readers, typically independently. An intermediate step towards autonomous AI would be to first replace only one of the two readers. In this case, the system still has to ‘augment’ the radiologists and compensate for mistakes they make (image by author).

In case of a completely autonomous AI system, all cognitive biases are alleviated. That does not mean the system is unbiased though. If it was trained with bias in the data, you have a different problem. Biases in the data such as the center the data was trained on, the manufacturer of the scanner and the annotator will still be reflected in the output.

To summarize, computers are powerful tools and have great potential for medical diagnosis. Until systems can operate independently, they should help radiologists and compensate for errors radiologists make. Carefully analyzing errors of radiologists, for instance, by looking at cognitive biases, could help boost the joint performance of the radiologist and the system.