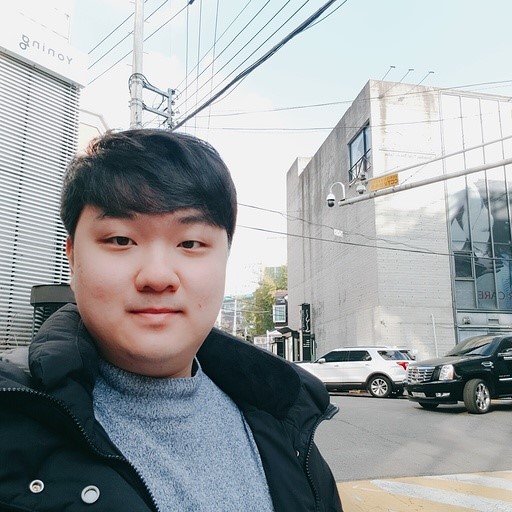 In this article, we discuss a paper about a novel video classification method that is formed only of self-attention block (as in ViT). This post explains the paper with both equations and code snippets. By looking into the implementation, we can clearly understand how the designed module actually operates. Also, the code snippets in this article can be used as building blocks for designing your own custom block, instead of implementing it from scratch. Please note that the authors have made the paper and code available.

Complicated mathematical equations have quite simple representation in code

In this paper, the authors presented:

Decomposition into patches. Following the ViT, each frame is decomposed into N non-overlapping patches of size P × P.

Linear embedding. Each patch x(p,t) is linearly mapped into an embedding vector z(0) of size D by means of a learnable matrix E of size D×3P² :

In the author’s official implementation, patch decomposition and linear embedding is implemented as a 2d convolution and the positional embedding is a learnable parameter that is added after the patch embedding. 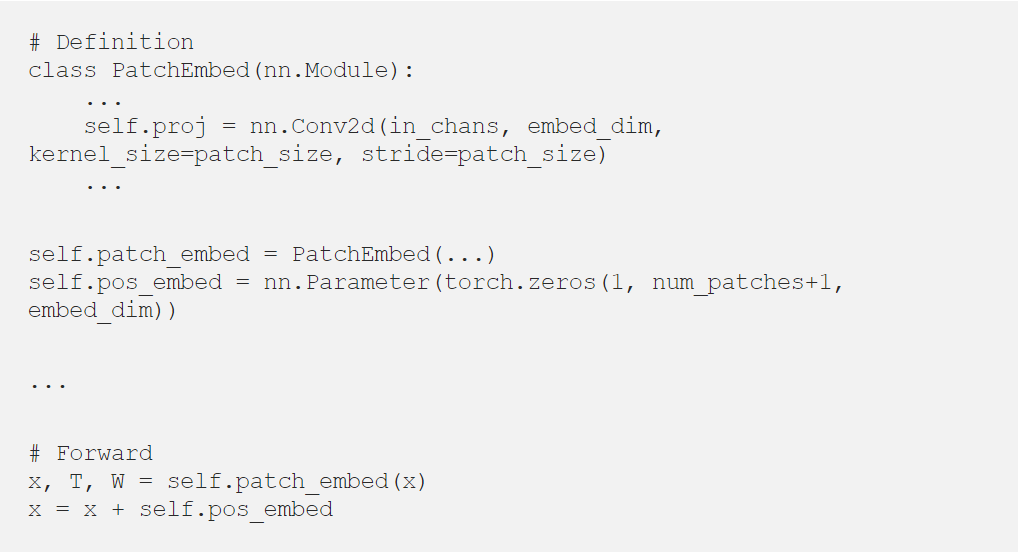 Query-Key-Value computation. The transformer consists of L encoding blocks. At each block l, a query/key/value vector is computed for each patch from the representation z(l−1) encoded by the preceding block:

where LN is LayerNorm. In the official implementation, this qkv embedding can be simply implemented as a linear layer.

where SM is softmax. In the official implementation, it is simply implemented as a batch matrix multiplication.

The typical method of computing self-attention weights results in quadratic complexity (O((HWT)²)) where H and W are the height and width of the feature maps, and T is the sequence length). The authors instead propose to reduce computations by computing over the spatial or temporal dimension separately (similar to separable convolutions). For example, if we compute temporal attention, h and w goes to batch dimension and matrix multiplication complexity reduced to T. 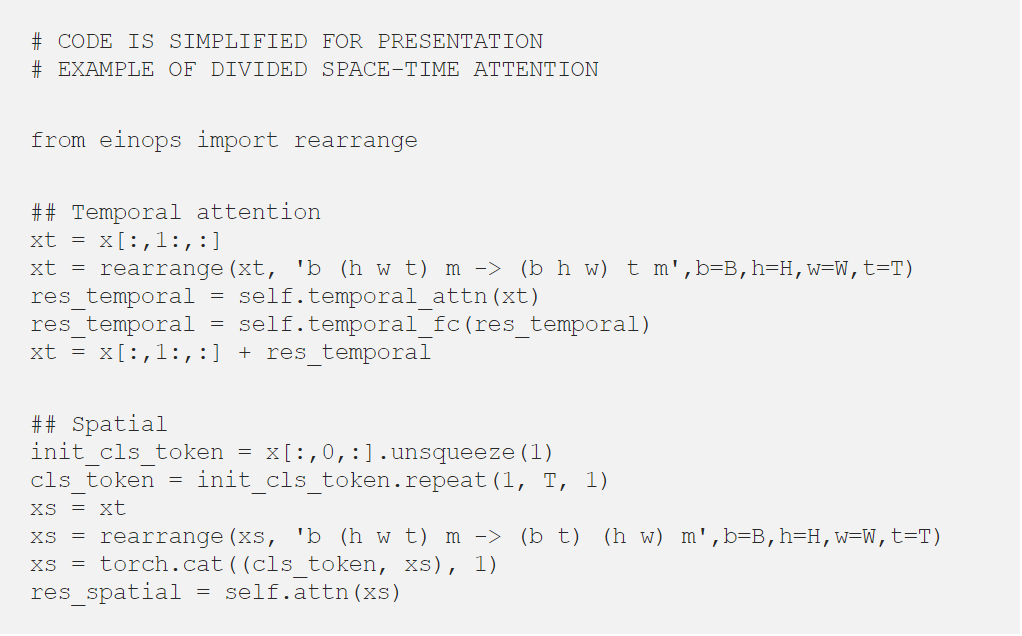 Above implementation uses einops, which supports flexible and powerful tensor operations for readable and reliable code.

How einops works, clipped from the source: official github

Encoding. The encoding at block l is obtained by first computing the weighted sum of value vectors using self-attention coefficients from each attention head:

In the official implementation, (the class token handling part = the equation related to index (0,0), is omitted)

Then, the concatenation of these vectors from all heads is projected and passed through an MLP using residual connection:

In the official implementation,

Figure 1. Visualization of the five space-time self-attention schemes studied in this work. Note that self-attention is computed for every single patch in the video clip, i.e., every patch serves as a query. We also note that although the attention pattern is shown for only two adjacent frames, it extends in the same fashion to all frames of the clip.

Five space-time attention schemes studied in this paper are visualized in Fig 1. In this visualization, each video clip is viewed as a sequence of frame-level patches with a size of 16 x 16 pixels. Patches are colored:

A collection of large-scale, high-quality datasets of URL links of up to 650,000 video clips that cover 400/600/700 human action classes, depending on the dataset version. The videos include human-object interactions such as playing instruments, as well as human-human interactions such as shaking hands and hugging. Each action class has at least 400/600/700 video clips. Each clip is human annotated with a single action class and lasts around 10 seconds.

Here are some samples from the dataset,

In a related paper, that uses the same dataset (Only Time Can Tell: Discovering Temporal Data for Temporal Modeling), the authors mentioned that a part of Kinetics dataset can be easily guessed from a single(or static) frame. It turns out to be an important characteristic of the dataset when the authors investigate the effect of different self-attention schemes.

This dataset contains 220,847 videos, each containing an action that can be described by a verb. The provided per-video label is typically as such: “Putting [something] onto [something]”. (link to SSv2 is not available currently)

The above two datasets are the main datasets used in most experiments, however, the model is also validated on the other datasets to show that the model can work in long video.

Diving48 is a fine-grained video dataset of competitive diving, consisting of ~18k trimmed video clips of 48 unambiguous dive sequences (standardized by FINA). This proves to be a challenging task for modern action recognition systems as dives may differ in three stages (takeoff, flight, entry) and thus require modeling of long-term temporal dynamics.

Each of the 48 dive sequences are defined by a combination of takeoff (dive groups), movements in flight (somersaults and/or twists), and entry (dive positions). The prefix tree below summarizes all the dive classes present in the dataset.

HowTo100M is a large-scale dataset of narrated videos with an emphasis on instructional videos where content creators teach complex tasks with an explicit intention of explaining the visual content on screen. HowTo100M features a total of:

Each video is associated with a narration available as subtitles automatically downloaded from Youtube.

Description from the official homepage

Recall from section ‘various self-attention schemes’, the space-only attention only builds an attention within each frame and neglects temporal dependencies across frames.

An interesting result is that space-only attention(S) performs well on Kinetics-400, but not on SSv2. The reason might be speculated form the related work that has found that the spatial cues are more important than temporal information in order to achieve strong accuracy in K400. On contrary, space-only attention(S) performs poorly on SSv2, since the dataset requires complex temporal reasoning.

Comparison to 3D CNNs. The authors performed an empirical study aimed at understanding the distinguishing properties of TimeSformer compared to 3D convolutional architectures, which have been the prominent approach to video understanding in recent years. Two 3D CNN models are compared with the transformer: 1) SlowFast (Feichtenhofer et al., 2019b), which was the state-of-the-art(at the time of presentation) in video classification, and 2) I3D (Carreira & Zisserman, 2017), which has been shown to benefit from image-based pretraining.

Figure4. Accuracy on Kinetics-400 (K400), and Something- Something-V2 (SSv2) as a function of the number of training videos. On K400, TimeSformer performs best in all cases. On SSv2, which requires more complex temporal reasoning, TimeSformer outperforms the other models only when using enough training videos. All models are pretrained on ImageNet-1K.

Table 7. Video-level accuracy on Something-Something-V2 and Diving-48. ∗∗Due to an issue with Diving-48 labels used in previously published results, we only compare our method with a reproduced SlowFast 16 × 8 R101 model. All models are pre-trained on ImageNet-1K.

In Kinetics-400, TimeSformer-L outperforms the other models. Also, TimeSformer still has competitive performance compared to convolutional network based architectures such as R(2+1)D, TSM, and I3D.

On the other hand, in Something-Something V2, it didn’t show better performance compared to the other models, even though they use high resolution and longer clip . My conjecture to this different result on two datasets is that the target of interest(or objects) are frequently moving in SSv2, and TimeSformer encodes the feature in temporal dimension only within its own spatial location in one step. So it may have difficulty when reasoning about different frame and different location objects.

There are other results in the paper, using HowTo100M dataset to show that the model is very effective in long-term task classification.

Figure 7. Visualization of space-time attention from the output token to the input space on Something-Something-V2. Our model learns to focus on the relevant parts in the video in order to perform spatiotemporal reasoning.

To visualize this, they used Attention Rollout scheme. Visual result suggests that TimeSformer learns to attend to the relevant regions in the video in order to perform complex spatiotemporal reasoning.

Figure 8. Feature visualization with t-SNE (van der Maaten & Hinton, 2008) on Something-Something-V2. Each video is visualized as a point. Videos belonging to the same action category have the same color. The TimeSformer with divided space-time attention learns semantically more separable features than the TimeSformer with space-only attention or ViT (Dosovitskiy et al., 2020).

In this article, we discussed a paper introducing a novel convolution-free video classification model named TimeSformer and described the method and experimental results with accompanying code. It is conceptually simple, and achieves the state-of-the-art result on major action recognition benchmarks, has low training & inference cost, and can be applied to long videos.

My personal lessons from this paper are…

Thanks to Thijs (타이스) Kooi and Wookie Park.