Lunit announced the presentation of two abstracts featuring its AI research on cancer treatment at the upcoming American Association for Cancer Research (AACR) Annual Meeting 2022. The meeting will be held from April 8 to 13 at the Ernest N. Morial Convention Center in New Orleans, Louisiana. This year marks Lunit’s fourth time presenting its findings at AACR. 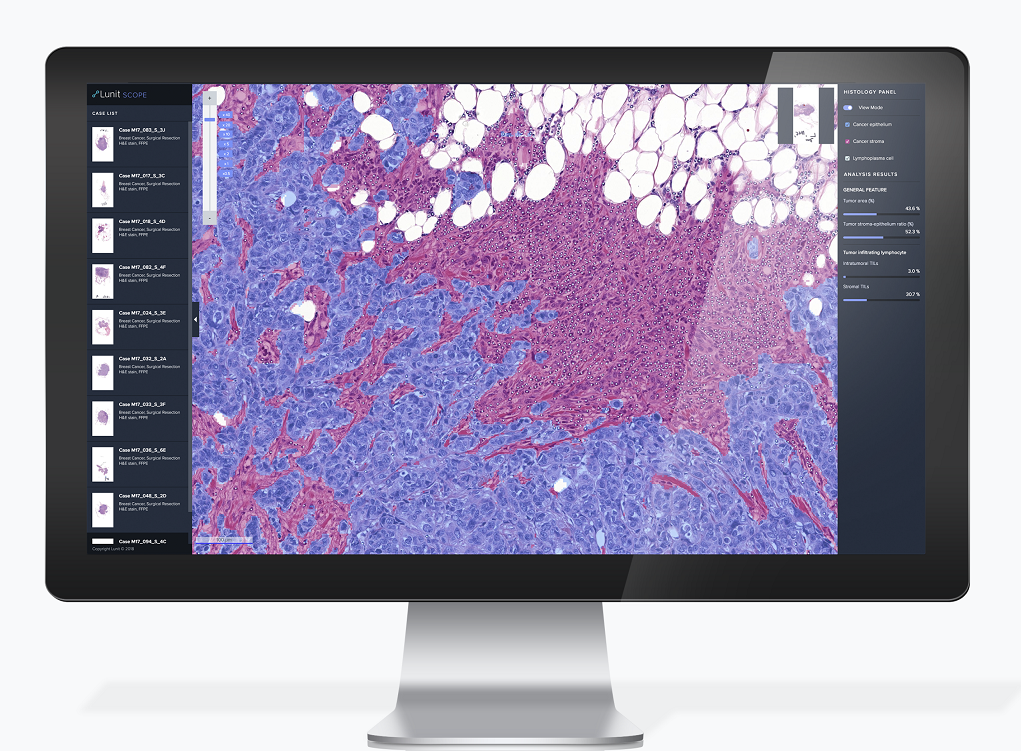 Lunit SCOPE IO analyzes a patient’s cancer tissue slide image by observing the distribution of tumor-infiltrating lymphocytes (TIL)—one of the representative immunocytes that fight cancer cells. Based on the spatial distribution pattern of TILs and cancer cells in the tumor microenvironment, Lunit SCOPE IO identifies the tissue sample as one of three immune phenotypes: inflamed, immune-excluded, and immune-desert.

In one of its abstracts, Lunit presents the correlation between its AI-based immune phenotype method and aberrant transforming growth factor-beta (TGF-B) pathways in pan-carcinoma.

For TILs to fight cancer cells, they must be located in proximity to each other. The aberrant TGF-B pathway in the tumor environment has been highlighted as one of the core resistance pathways that inhibit immunotherapy by excluding TILs from the tumor area. This type of distribution is classified as the immune-excluded phenotype, in which TILs are separated from the cancer cells.

Upon conducting a large-scale, pan-carcinoma analysis, Lunit’s research team found that an aberrant TGF-B pathway is indeed associated with the immune-excluded phenotype, as well as increased proportions of cancer stroma.

“This was a multi-omics study incorporating genome-based analysis that shows a direct correlation between immune phenotypes with the TGF-B pathway,” said Chan-Young Ock, Chief Medical Officer at Lunit. “By developing our AI to analyze TIL and their spatial relationship with cancer stroma, Lunit was able to initiate the first study that directly compares immune phenotypes and TGF-B expression on a large-scale database.”

The company will also deliver an oral presentation on the distinct clinical outcomes and molecular profiles among immune phenotypes in endometrial cancer.

Lunit’s studies thus far first focused on the validity of immune phenotyping as a biomarker for advanced non-small cell lung cancer (NSCLC). However, this study demonstrates that similar AI-based spatial analysis can bring clinically significant results as a biomarker in endometrial cancer.

“Given the significant differences in survival outcome depending on each phenotype, AI-based tumor microenvironment classification using Lunit SCOPE IO may serve as a clinically significant, prognostic biomarker in endometrial cancer,” said Brandon Suh, CEO of Lunit. “We plan to expand the range of our research to validate the efficacy of Lunit SCOPE IO in all cancer types originating from the epithelium.”

The Lunit team will be exhibiting at AACR, at booth 1364.

Lunit to Present 5 Abstracts at the ECR Meeting 2022

Lunit Announces Financial Results for the First Half of 2022

Lunit to Showcase 5 Abstracts at ESMO 2022