Reducing the workload of radiologists to classify mammography screenings

Recent studies have shown that Lunit’s AI solution is as accurate as average radiologists when it comes to identifying breast cancer and it could potentially have a role as independent reader in the future, to reduce radiologist workload and possibly to increase cancer detection.

A pair of studies conducted by Dr. Fredrik Strand from Karolinska Institutet and his research team have been recently published in JAMA Oncology and The Lancet Digital Health, well-known to be among the leading peer-reviewed journals in medicine, featuring performance results of Lunit INSIGHT MMG, a commercial AI solution for breast cancer detection from mammograms.

According to the study published in JAMA Oncology, the team conducted the first independent comparison of several commercialized AI. Three different AI algorithms were analyzed including Lunit’s solution (Lunit INSIGHT MMG) to identify breast cancer. They were evaluated in a large retrospective screening cohort. 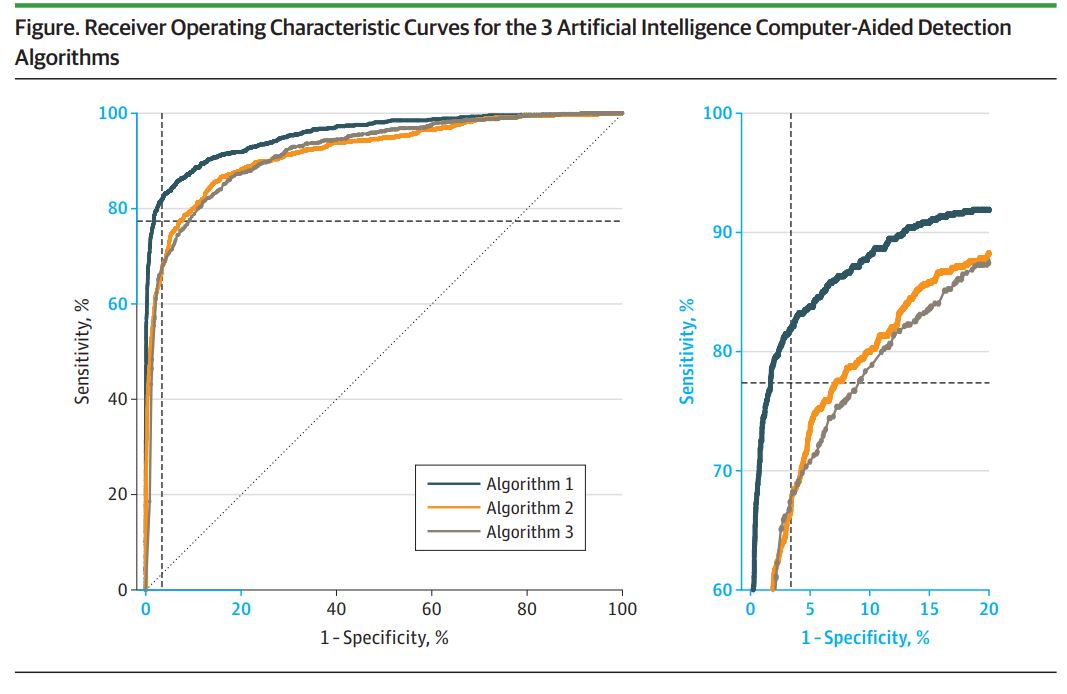 Download
▲ The graph shows the highest performance of Algorithm 1(Lunit). The wider area of the graph corresponds to the higher performance in Al algorithm.

Based on 8,805 cases, Lunit’s algorithm showed the best accuracy among others, showing around 15 percentage points higher sensitivity than the other two algorithms. It also surpassed the sensitivity of the first-reader radiologists, and achieved a synergistic sensitivity of 88.6% when combining first-readers and Lunit’s AI solution.

“The significant leap in performance comes from our proprietary algorithm, meticulously trained by an unprecedented quantity of data with accurate ground truth,” said Ki Hwan Kim, Chief Medical Officer of Lunit. “Our training dataset includes 72,000 biopsy-proven breast cancer cases, which is considerably more than other algorithms mentioned in the study.”

In line with the high performance, the possibility for AI to triage certain screening examinations was suggested in the study published in The Lancet Digital Health. It focused on how AI-based scoring can be used to reallocate radiologist time from clearly negative mammograms to cases requiring additional attention by radiologists, ultimately reducing their workload and improving cancer detection.

The study proved that for the majority of mammograms receiving a low abnormality score Lunit AI rarely missed any cancers when assessing the data alone, with no radiologists involved. If no radiologist resources were used for 60% of women with the lowest AI scores and were invested into doing MRI for the top 2% AI scores (that were negative after radiologist double reading of the mammograms), a net of 103 of 547 cancers would potentially have been detected up to 2 years earlier, corresponding to a detection rate of 68 cancers per 1000 supplemental screening examinations. 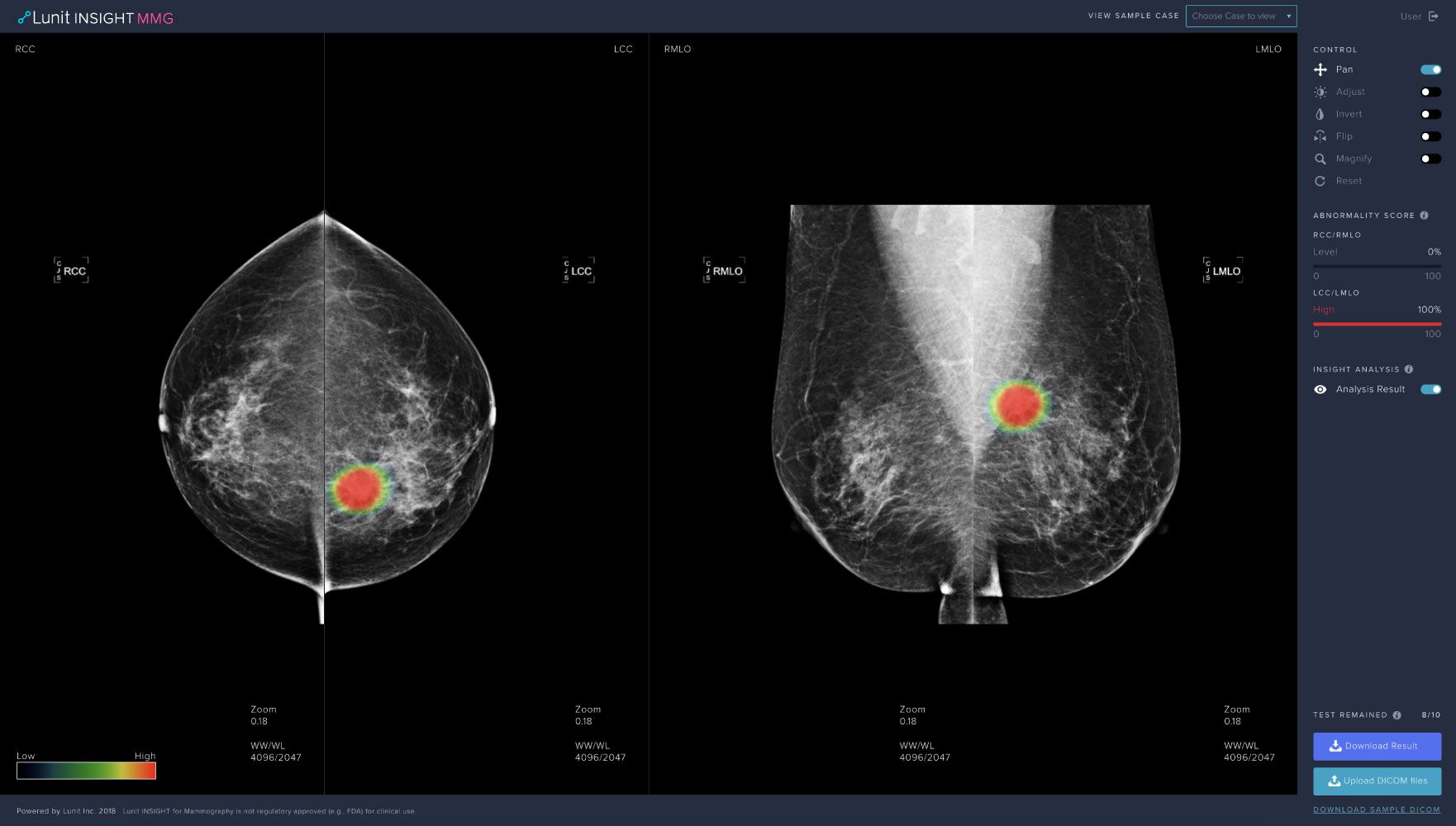 Fredrik Strand, a researcher at the Department of Oncology-Pathology at Karolinska Institutet and a radiologist at Karolinska University Hospital explained, “The studies show the potential of commercial AI algorithms as independent readers in screening mammography assessment on a clinically relevant level. The next step for us is to explore how well the Lunit AI algorithm works as an independent reader in a prospective clinical setting. In the future, I am convinced that AI image analysis will contribute to further improvements in overall survival for breast cancer patients.”

“As breast cancer is the second leading cause of death in women, early detection is the best defense in treating the disease,” says Brandon Suh, CEO of Lunit. “It is very meaningful for our algorithm’s high-performance level to be recognized in these well-designed studies based on a significant actual screening cohort data, and we hope to continuously provide the best solution for the right diagnosis of patients.”

Lunit to Present 5 Abstracts at the ECR Meeting 2022

Lunit to be listed on KOSDAQ next week

Lunit Announces Financial Results for the First Half of 2022

Lunit to Showcase 5 Abstracts at ESMO 2022